Effectively, the judges have ruled that Alex Jones is guilty before proven guilty and will instruct the jury to determine just how guilty he is.

In an unprecedented assault on due process and the rule of law, both a Texas and Connecticut judge have ruled that Alex Jones may not discuss the First Amendment, defend his innocence, or point out the rigged elements of the upcoming Sandy Hook defamation case against him.

Here is a limited breakdown of some of the most egregious constitutional violations of due process and the First Amendment as explained by a third-party legal adviser:

You have been denied your fundamental, constitutional due process right to present a defense in Texas or Connecticut. Both Judge Guerra Gamble (D) (Texas) and Judge Barbara Bellis have stripped you of your First Amendment rights for allegedly failing to provide enough discovery. Neither judge can deny that you responded to discovery, they just ruled that it was insufficient. The effect of these rulings, incredibly, is that you have been found guilty by two judges who never even held trials or heard any evidence.

Judge Guerra Gamble has largely agreed that Alex Jones’ lawyers should be gagged during Alex Jones’ trial from:

Alex Jones has also been prohibited from asserting that the plaintiffs have become public figures by appearing on television, testifying before Congress, giving TED talks, and publishing books.

Finally, the Texas judge has determined that the “jury shall be instructed” to find any arguments about Infowars’ journalistic practices to be “established in favor of the Plaintiff.”

“Even the plaintiffs recognized this order was completely illegal and took the unprecedented step of asking the court to rescind it after you filed an appeal,” the legal adviser noted.

Jury selection for the defamation case begins on July, 25th 2022.

In constitutional republics, the accused are innocent until proven guilty.

In tyrannies, the accused are proclaimed guilty until proven guilty.

This is it America; due process under the Fifth and Fourteenth Amendments, along with the First Amendment are being systematically destroyed by the judiciary to crush the political establishment’s opposition.

Read the ruling below: 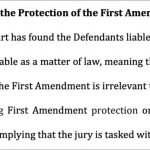