Congressman Perry Gets Phone Back From FBI, Unclear About Motives Behind Seizure

"They Can Do Audio, Video, & Physical Surveillance On You 24H/365D A Year": Rex Lee On Intrusive Apps

Time To Take A Stand

Great Deception: How To Seek Truth Through The Media’s Web of Lies — Sunday Night Live

The post Four People in Critical Condition After Lightning Strike Near White House appeared first on The Gateway Pundit.

Four people are in critical condition after a lightning strike at Lafayette Park – right next to the White House.

The four people were struck at Lafayette Park on the 1600 block of Pennsylvania Avenue NW around 6:52 pm, Fox 5 DC reported.

Apparent lightning strike Lafayette Park NW. #DCsBravest on scene in the process of treating and transporting 4 patients, all in critical condition. pic.twitter.com/1jyCh44Q2n

2 adult females and 2 adult males were transported to local hospitals.

All four have life threatening injuries.

BREAKING: 4 people injured after a lightning strike in Lafayette Park. We’re told they’re in critical condition. Details in clip below. @LindsayAWatts on her way to the scene. @fox5dc pic.twitter.com/NAVDbhf3EK

Our camera was rolling on the White House North Lawn tonight when lightning struck Lafayette Park nearby, injuring four. The thunder was so loud, @gabrielle_ake and I jumped up in fright. “That’s too close — we’re shutting down” advised photographer Ron Windham. pic.twitter.com/oTtU9VeQBw

The post Four People in Critical Condition After Lightning Strike Near White House appeared first on The Gateway Pundit. 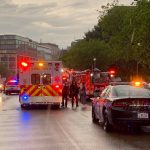 California Announces Fifth Case Of Pediatric Monkeypox In US