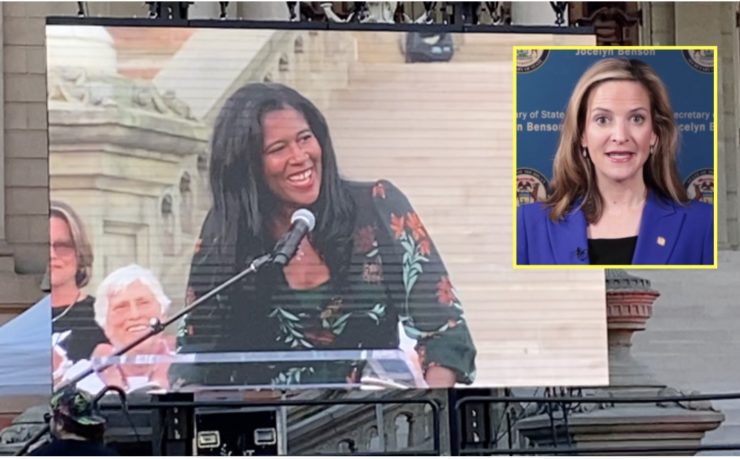 100 Percent Fed Up exclusive – Last night, MI Republican rockstar and SOS candidate Kristina Karamo brought down the house with yet another fiery speech that came straight from her heart. Karamo’s unscripted speech was exactly what the MI GOP needed to help unite them and give them direction following a somewhat contentious MI GOP…

100 Percent Fed Up exclusive – Last night, MI Republican rockstar and SOS candidate Kristina Karamo brought down the house with yet another fiery speech that came straight from her heart.

Karamo’s unscripted speech was exactly what the MI GOP needed to help unite them and give them direction following a somewhat contentious MI GOP State Convention, where 70% of newly elected delegates, most of whom are America First patriots, let the establishment Republicans in their state know that We The People are now in charge.

“My name is Kristina Karamo, and I’m going to be your next Secretary of State!” Karamo said as she opened up her heartfelt speech by telling a crowd of hundreds of elected MI Precinct Delegates, “We’re gonna win in November!”

“It’s time for us, as Republicans, to come together and truly unify—not ‘shut up’ unify, but to truly unify—and get together and fight, and go scorched earth for this state—because our children and our grandchildren’s futures depend on it!”

Karamo, who’s one of the most gifted communicators in the GOP, was the perfect follow-up after a contentious convention that laid bare the division between the establishment’s old guard Republicans and the new, more powerful grassroots, America First faction of the Republican Party that are fully behind the Trump-endorsed candidate Kristina Karamo.

She began her speech by mocking a small group of “Democrats” driving around with a portable billboard with horrible images of top GOP candidates in an attempt to disrupt the planned GOP event on the front lawn of the MI State Capitol. Karamo quickly shifted gears and turned her attention on the “dishonest journalists” who call her an “election denier.” She asked, “Now, where did that talking point come from? And then she landed her first mic drop moment, “The only thing that I’m denying is that Jocelyn Benson knows how to run a clean election! She is the most lawless Secretary of State in our state’s history!” The MI GOP SOS candidate didn’t have to go back very far to cite an example of Benson’s attempts to corrupt our elections. “As a matter of fact, a judge just ruled against her because Jocelyn Benson doesn’t want to remove dead people from our voter rolls!” “Hmmm…now answer me this—‘ Why wouldn’t she want to clean dead people off our voter rolls?’ she asked the crowd. “It’s clear–because she wants to defraud the people of Michigan of our voice!” When Karamo revealed she was not going to shut up about election fraud to appease the establishment Republicans who are telling her to stop talking about it, she got a massive round of applause.  “It is a national security threat what she’s up to, and I’m not backing down on that no matter how many people ask me to!” she exclaimed.

Karamo also hit Benson hard on the excessive fees that the MI SOS office charges residents. “Only 7% is needed to run the department based on how much revenue they bring in. Only 7% of that 2.9 billion dollars! But yet, they want to constantly justify increasing fees to go blow it on programs for them to grease the palms of their friends!” Karamo said. “Michigan is done! she exclaimed. “We are done!”

And Karamo wasn’t letting delegates off the hook, she explained how everyone needs to be held accountable for their roles in assuring Republicans win in the upcoming November election. “You have to contribute!” she told the elected Precinct Delegates and told them they have to “go for broke on that ballot.” She explained how they need to help in every race, including Tudor Dixon’s race for governor, the attorney general’s race, congressional races, county commissioners, state reps, and state senators.   “You have to volunteer!” she told them. And then, Karamo really went off the typical GOP script, “We have to push into Blue areas! We need to stop being afraid!  Some people are gonna call you names, but you have to ask yourself, ‘What is your children’s freedom worth?’ What is it worth to you?” she asked, as the crowd erupted, many of them jumping to their feet.

Karamo looked straight at the camera and delivered a blistering invitation to Michigan’s corrupt Democrat Secretary of State: “I cannot wait, Jocelyn, because you’re a habitual liar, and you will be exposed for the world to see, and the nice little neighborhood mom act will be peeled off, and we will expose you for the criminal that you are!” The crowd absolutely erupted.

At the end of her mic drop speech, Karamo promised that she will always be the person her supporters see in front of them today, that she will be the same person who asked her supporters to help fundraise or volunteer for her after she wins the race because she answers only to God.

If you’d like to check out her website KristinaKaramo.com for more information or about how you can help her defeat the Soros-backed Jocelyn Benson in November, go HERE. 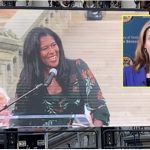 Go to Source
Author: Patty McMurray
Related Topics:Featured
Up Next