Rep. Ted Lieu Says There Has Always Been A Crisis At The Southern Border But That’s Not What He Said Under Trump

Best And Worst States For Summer Internships For Gen-Zers

19-Year-Old TikToker Arrested For Scamming Hundreds of GoFundMe Donors Out of $37,000 with Fake Cancer Diagnosis

The End Of Monetary Hedonism

Hardwired for Control – The Brain-Computer Interface Is Already Here 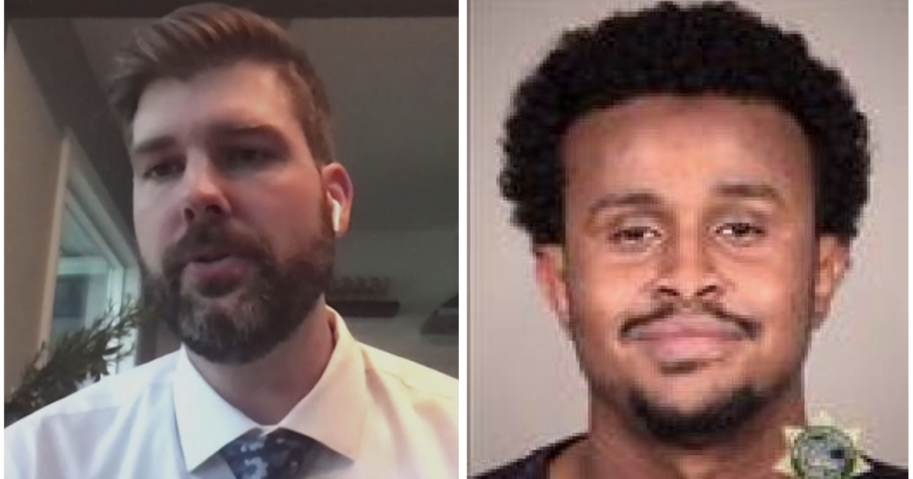 As many Gateway Pundit readers have probably seen from other news sources, a man in Portland who had been bailed out by pro-antifa/pro-BLM group, Portland Freedom Fund, while facing domestic violence charges has now been arrested and jailed after allegedly murdering the same prior victim. Mohamed Adan is now sitting in Multnomah County jail, finally.…

The post Portland Man Accused Of Murder Was On Release From Multiple Domestic Violence Charges appeared first on The Gateway Pundit.

As many Gateway Pundit readers have probably seen from other news sources, a man in Portland who had been bailed out by pro-antifa/pro-BLM group, Portland Freedom Fund, while facing domestic violence charges has now been arrested and jailed after allegedly murdering the same prior victim. Mohamed Adan is now sitting in Multnomah County jail, finally.

What isn’t being talked about so much is how Multnomah County DA Mike Schmidt and Multnomah County judges repeatedly let Adan go free on recognizance in several recent other cases, as well as dismissing charges on other cases. These cases mostly involve the same victim, Racheal Angel Abraham, whom Adan has been accused of strangling, assaulting, harassing, and stalking, before murdering her while out on bail.

Here’s a brief rundown of Adan’s prior criminal history (click on the links to bring up the court documents):

– In the Oregon court documents there are references to prior convictions of Robbery, Burglary, and Theft in Texas, along with a DWI in Minnesota.

– In March of 2021 Adan faced DUII and Reckless driving charges. They were dismissed by the Multnomah County DA’s office.

– In November of 2021 Adan was facing charges of Fourth Degree Assault and three counts of Harassment. Those charges were dismissed by the Multnomah County DA’s office.

– In May of 2022 Adan was facing another accusation of Fourth Degree Assault and only one count of Harassment this time. Those charges were dismissed by the Multnomah County DA’s office.

– Later in May of 2022 Adan was arrested on charges of Felon In Possession of a Firearm, Hit and Run, DUII, Attempt To Elude Police, and Reckless driving. After being released the next day on recognizance, these charges were later dropped on August 18th, 2022.

– In June of 2022 Adan was arrested on charges of five counts of Felony Strangulation and two counts of Assault in the Fourth Degree (click on images to enlarge). The listed victim is Rachael Angel Abraham. 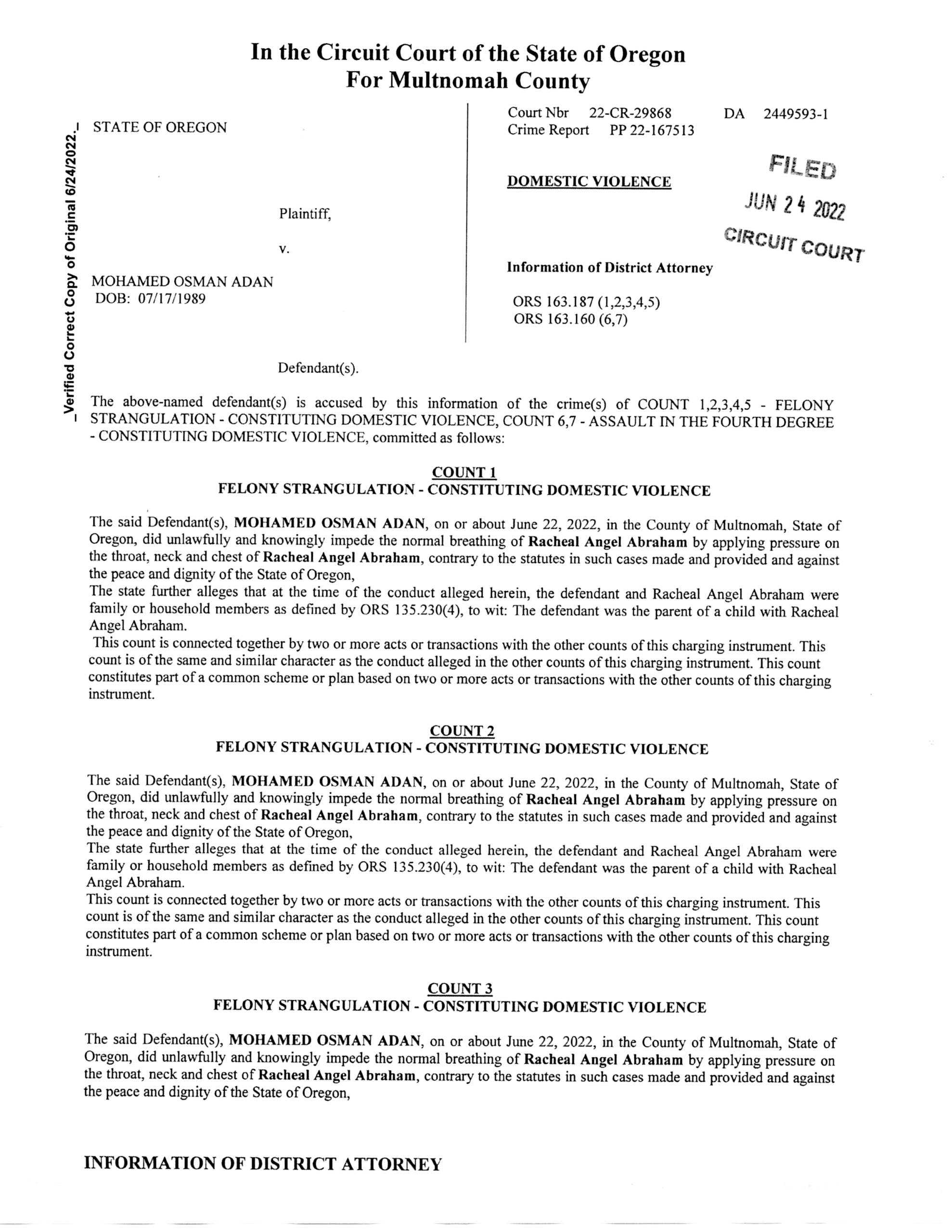 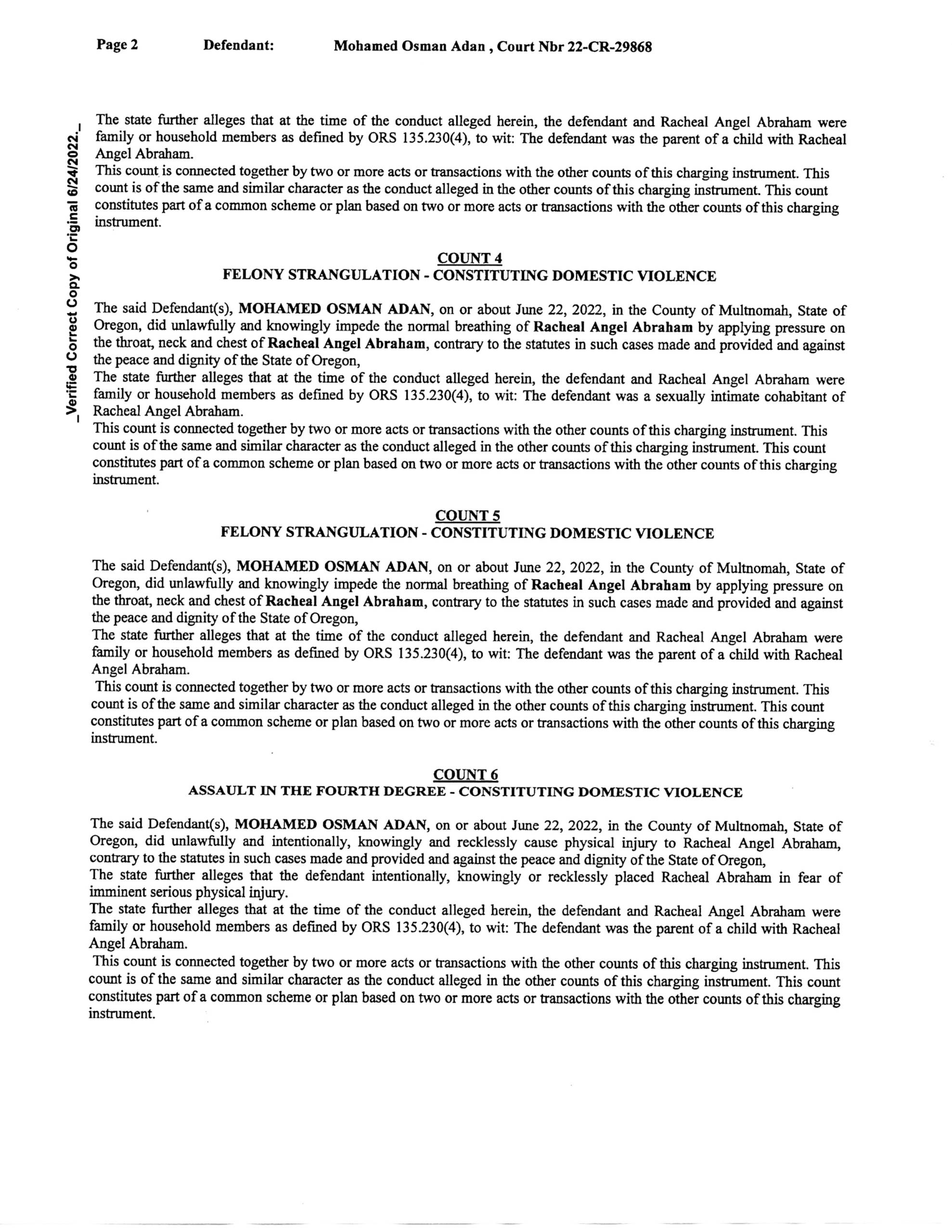 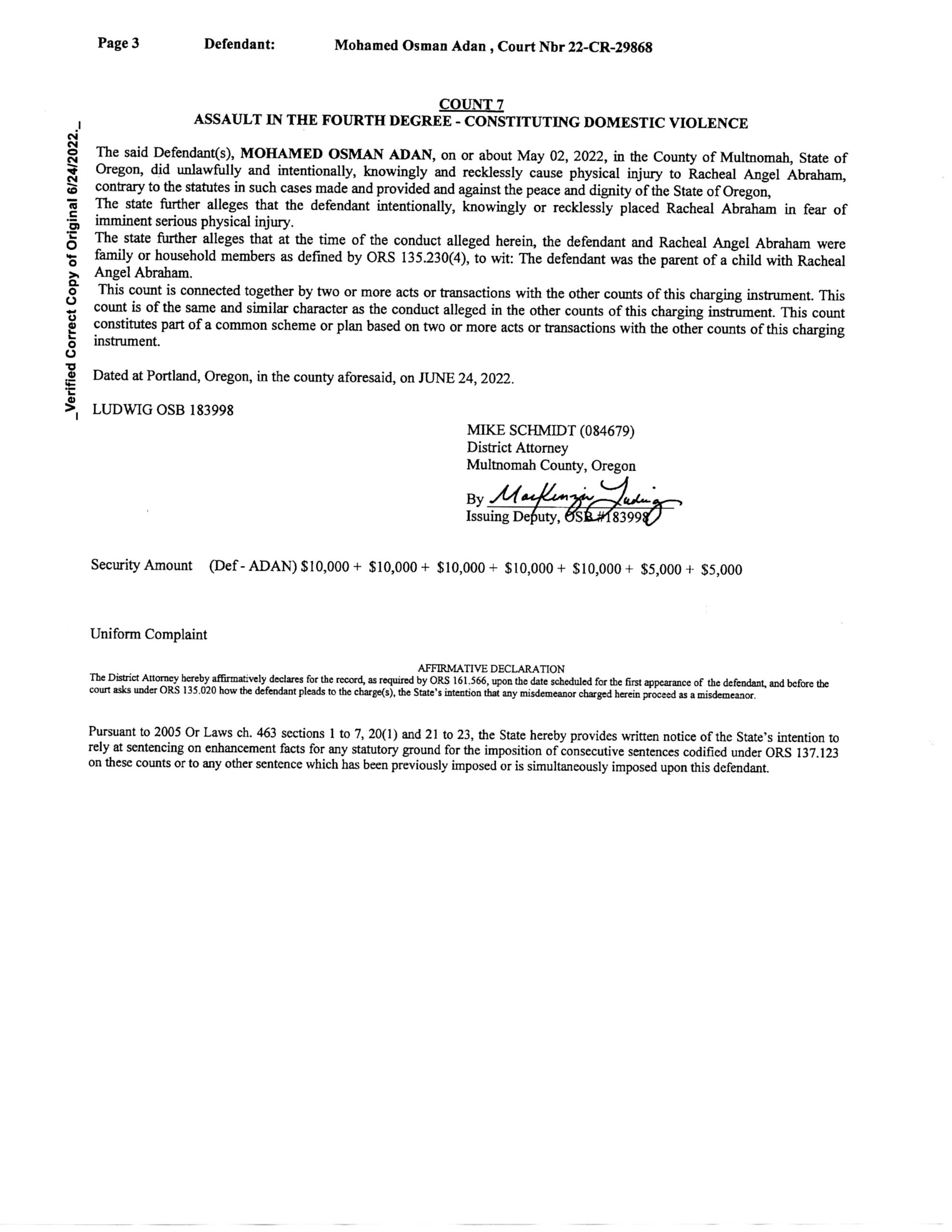 Though Adan was supposed to be held on $60,000 bond, he was released on recognizance with $0 bail on June 28th, with direct orders to not have any contact with Abraham or her children and wear a GPS monitor. 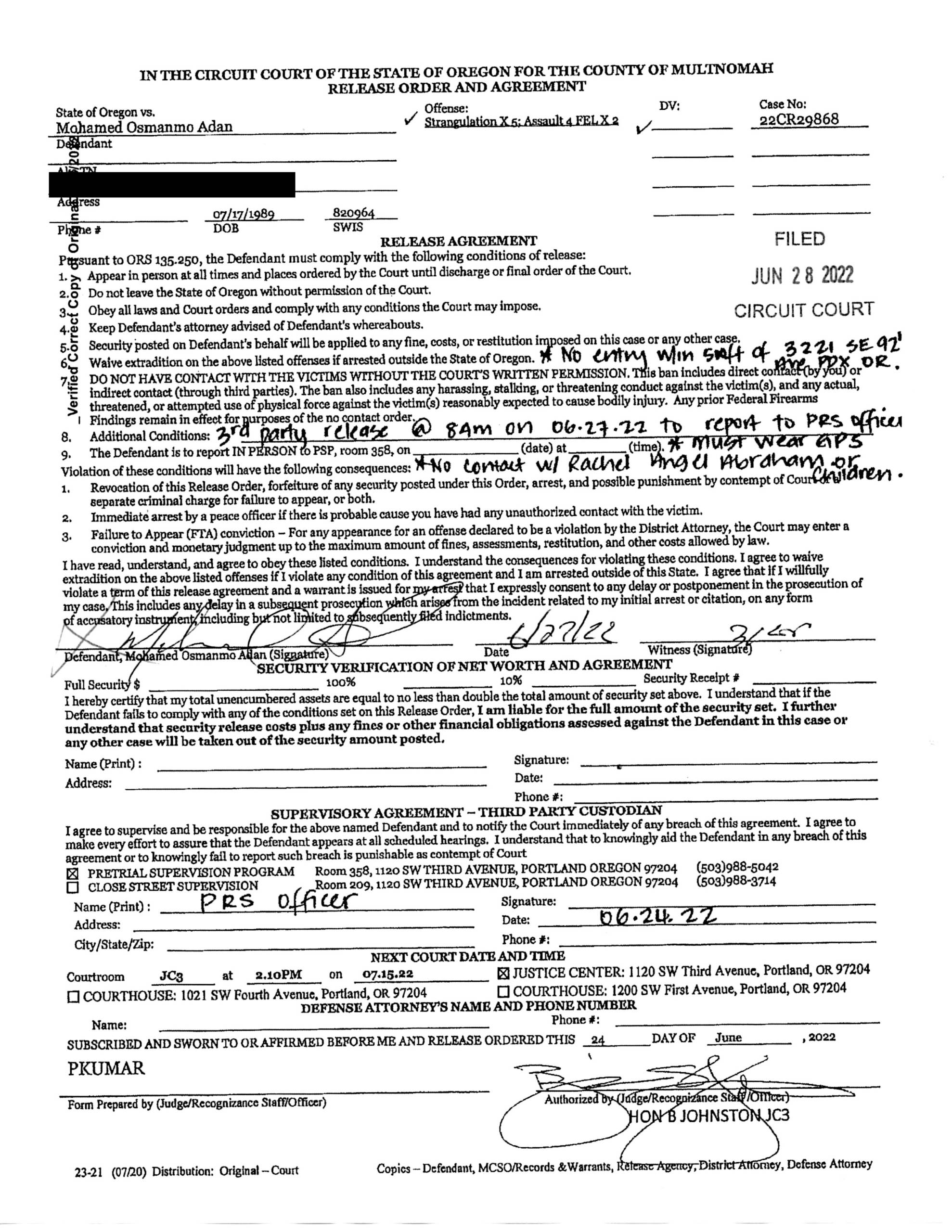 Despite the indictment, no arrest warrant went out and he was not ordered back into custody.

– On July 27th, Adan allegedly went to Abraham’s residence, in violation of his orders. His pre trial release officer, Amie Banta, filed an affidavit in support of revoking Adan’s release and ordering him back into jail. A bench warrant then went out for Adan’s arrest.

– On August 11th, 2022, Adan was arrested yet again, this time on multiple counts of Contempt of Court and Violation Of Release orders. Deputy District Attorney MacKenzie Ludwig, who is also a prosecutor on one of his other cases, wrote in the probable cause affidavit:

On August 11, 2022 at 3:14 AM, Portland Police Officers Huan Tran and Ariel Livingston responded to 3221 SE 92nd Ave. Officers spoke with victim Racheal Abraham outside the home. She indicated her ex-husband, Mohamed ADAN locked her outside of her house. ADAN was inside with their shared children. Officers knocked on the door numerous times, but they were unsuccessful in getting ADAN to come to the door. Abraham reported she was sleeping with the children in the living room when at about 2:00 AM, ADAN used her key to open the door and sneak in through the front door. ADAN used his hand to cover her mouth, likely to prevent her from yelling, but she was able to breathe normally. Abraham screamed, which woke up the two children. Then, ADAN used a prayer bead, which is five to six feet long and swung it at her right
cheek. She said it did not hurt, there were no observable markings.

Officers coordinated a plan where they would “walk away” and let Abraham knock on the door to see if ADAN would come out. After a few knocks, ADAN opened the door and officers immediately went inside and arrested ADAN. Officer Tran advised ADAN of his Miranda rights from his Miranda card while transporting him to jail. ADAN said he understood his rights and replied, “Fuck you Miranda”.

Since being released, ADAN has failed to comply with court issued orders and obey all laws. Deputy Amie Banta with Close Street Supervision filed an Affidavit in Support of Revocation of Recognizance Warrant on July 26, 2022 in 22C29868. ADAN was ordered to wear GPS. During his intake, he signed the conditions of release, which included obeying all laws and court orders, no contact with Racheal Abraham or the children, no entry into 3221 NE 92nd Ave, and comply with the terms of electronic monitoring. ON July 27, 2022, CSS was notified by the GPS monitoring company ADAN went to Abraham’s home. He then cut off his GPS monitor. CSS attempted to contact ADAN, which he claimed someone came into the house while he was sleeping and just cut off his monitor, but then left doing nothing else! He also denied going to Abraham’s home even though he was pinged at the house. When advised he was at her home, he hung up on Deputy Banta.

There are significant lethality factors, which includes potential access to firearms, increase in physical violence and the severity of physical violence, the named victim has left or separated from offender after living together within the last year, offender threatens to kill the named victim, offender has avoided being arrested for domestic violence, victim has children that is not the offender’s child, offender has strangled victim, offender uses illegal drugs, offender controls most or all of victim’s daily activities, victim believes offender is capable of killing her, offender follows or spies on victim, and repeated violations of the restraining order and/or court orders.

– Nine days later, on August 20th, after a bail reduction hearing, Amanda Lea Trujillo of the Portland Freedom Fund plunked down $2000 to bail Adan out. Adan’s public defender, Jennifer Forman List, had successfully argued before Judge Jerry Hodson to reduce the bail of a man currently facing several charges of assault and domestic violence in multiple cases. Deputy District Attorney Afton Coppedge either agreed to the reduction or failed to successfully argue for an increase in bail. 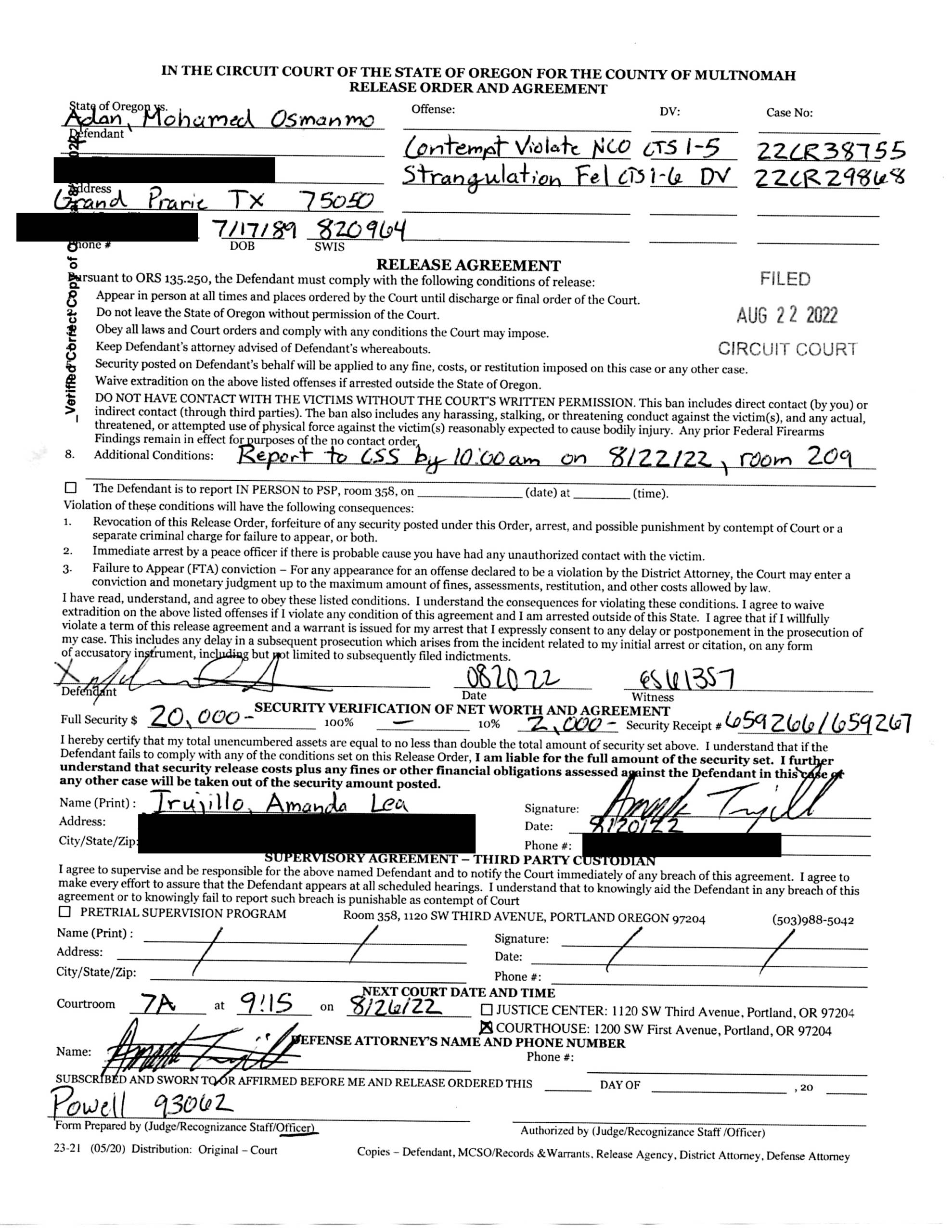 – Then, just seven days later, Adan showed up once again at Abraham’s home and allegedly stabbed her death. Who could have possibly seen this coming? Apparently everyone except Amanda Trujillo, the Multnomah County DA’s office, and the weak judges, such as Benjamin Johnston and Jerry Hodson, who repeatedly either dropped charges on him or allowed him to walk free despite multiple violations of his orders from pending cases. 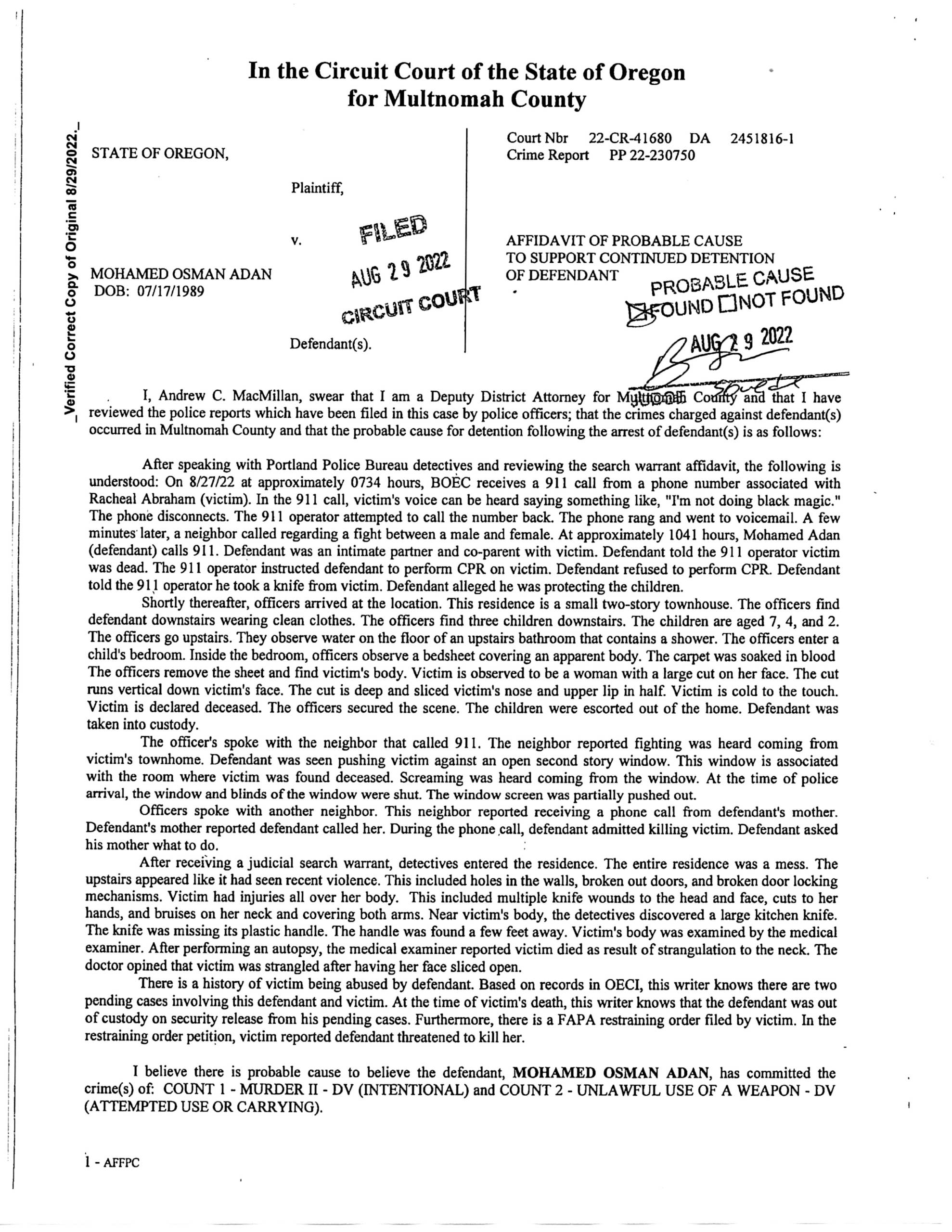 “The action taken by the Portland Freedom Fund circumvented this, with tragic results. We offer our deepest condolences to the family of the victim, and will dedicate our efforts to the full prosecution of this matter.” https://t.co/qh6Q22GJAu

Hi @DeinosPro, Adan’s prior offenses did not meet the court’s criteria for him to be held without bail by the judge on this case. Per DA Schmidt’s statement to the Oregonian:

“Our prosecutors aggressively pursued a high bail amount in this case,”

How soon will it be until Adan is released yet again?

The post Portland Man Accused Of Murder Was On Release From Multiple Domestic Violence Charges appeared first on The Gateway Pundit. 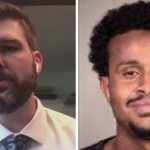 Go to Source
Author: Brock Simmons
Related Topics:Featured
Up Next

These Are The Countries Most In Debt To China

Rep. Ted Lieu Says There Has Always Been A Crisis At The Southern Border But That’s Not What He Said Under Trump