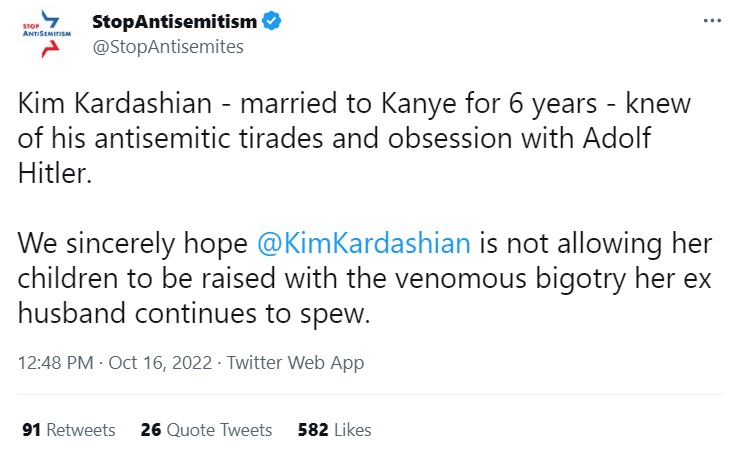 The Jewish activist group StopAntisemitism called for Ye to lose custody of his children earlier this month.

Ye said Sunday night on Parler that he was told by his custody lawyer Bob Cohen that he will lose custody of his children if he keeps up his “anti-Semitic rhetoric.”

“On my last and final meeting with Bob Cohen he told me ‘if I keep up anti-Semitic rhetoric you’ll loose custody of your children,’” Ye said.

“So let me get this straight,” he continued. “If I complain about Jewish business practices it’s considered anti Semitic So my custody lawyer was basically telling me If you complain about getting done wrong in business You will loose custody of your children And this was the guy on my side.”

“Bob Cohen was my custody lawyer,” Ye said in another post. “On our first meeting he had a black woman there I asked him why she was here He replied Chris Rock told me I needed to hire someone black He didn’t say She was a great lawyer He simply said I hired her cause she was black.”

The Jewish activist group StopAntisemitism called for Ye to lose custody of his children earlier this month.

TMZ’s Harvey Levin also suggested that Ye’s “anti-Semitic rants” and “mental illness” should be a factor in denying him custody of his children.

“To me, at the very least, I could see a judge saying at this point that there’ll be visitation [rights] but it’s going to be supervised,” Levin said.

Ye said in another post on Parler that he was suspended from Instagram “for telling Russel Simmons that I was going to make ‘you know who’ have better contracts and business practices.”

Simmons can be seen in the text urging Ye to “be the hero” in this situation by bashing white people instead of his “Jewish brothers.”

“[L]et’s be the hero in this it’s very possible you can be the bridge and fight white supremacy while getting out the frustrations that blacks have with their jewish brothers in a digestible way,” Simmons said.

“I’m staying in America,” Ye responded. “I gotta get the Jewish business people to make the contracts fair Or die trying.’

Simmons said last week that Blacks and Jews should unite against “white supremacy” and urged Ye to apologize to the Jewish community.

“We have common enemies, the blacks and the Jews, and great purpose together … we are joined at the hip in our fight against white supremacy,” Simmons said. 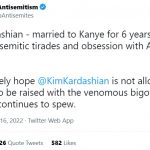 Buried: Flash Floods Cause Deadly Mudslides In The Philippines