Hundreds of Patriots turned out to see their Trump-Endorsed candidates this Thursday night.

I hope to see you there!

Kelly Cooper is running for US Congress in Arizona’s District 4 against Radical Left Democrat Greg Stanton.

President Trump gave Kelly Cooper his Complete and Total Endorsement last month at his Save America rally in Mesa, Arizona.

“As a Small Businessman, Kelly will work hard to Grow the Economy and Hold Joe Biden and Greg Stanton, who is beholden to the Radical Left, Accountable for their colossal incompetence,” President Trump stated in his official Endorsement.

With Kelly Cooper in Congress and Blake Masters in the US Senate, Republicans will fight against Joe Biden’s inflation, stand up for free speech, deliver resources to help Arizona secure its southern border, and secure elections on the federal level.

Kari Lake, Abe Hamadeh, and Mark Finchem will declare an invasion on Arizona’s southern border with Mexico and work to secure election integrity and prosecute elections criminals across the state.

Kari Lake is still leading Radical Leftist and twice-convicted racist Katie Hobbs in the polls, and she is expected to win this election if it is fair.

However, as Secretary of State and Chief Elections Officer, Katie Hobbs only showed up to her office 19 days out of six months, and her office recently made an “error,” sending up to 6,000 incorrect ballots to voters across the state.

This is how the Democrats have inserted fake ballots into the elections systems for years.

Watch the rally live below:

The rally will begin any moment! 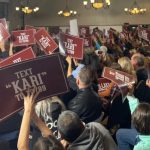