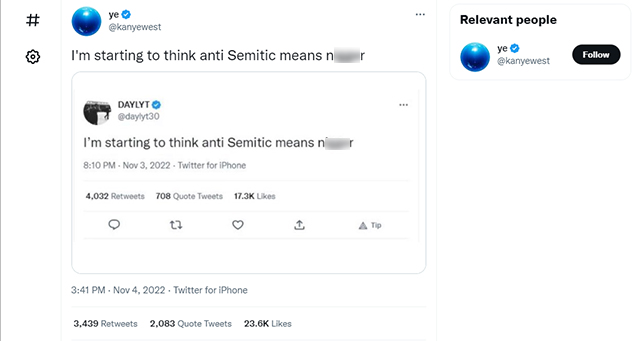 Rapper suggested term ‘antisemite’ now being used as pejorative like the N-word to smear black individuals who leave the political correctness plantation.

Ye, formerly known as Kanye West, has received a seven-day suspension from Twitter over his use of the N-word, according to his conversation with Alex Jones.

This may be the first time Twitter has ever censored a black person for saying the N-word.

Notably, Ye’s comment was not an attack or insult directed at anybody, nor was it a call for violence. Nevertheless, the tweet was taken down for “violating the Twitter rules.”

Ye was simply pointing out that the term “antisemite” is now being used as a new pejorative like the N-word to demonize blacks who left the political correctness plantation.

“What he’s saying is it’s being used as racism against black people, like calling people antisemitic is the new N-word,” Alex Jones said Saturday. “All he’s saying is calling black leaders who left the politically correct reservation ‘antisemitic’ is the new derogatory term. Since when are black people not allowed to use the N-word?”

And for that, Kanye is now being censored.

Is Twitter’s new CEO Elon Musk aware of this development?

It’s likely Musk does not yet have full operational control of Twitter and its censorship mechanisms, but hopefully that will change, and Ye’s account may be the litmus test.

Despite meeting with Musk this week over “content moderation” concerns, the Anti-Defamation League (ADL), the premier pro-Israel lobbying group, ordered a global advertiser boycott of Musk’s Twitter on Friday for not doing enough to censor Kanye “Ye” West and other critics of their power.

Today, we are joining dozens of other groups to ask advertisers to pause Twitter spending because we are profoundly concerned about antisemitism and hate on the platform. Here’s why we’re asking advertisers to #StopHateForProfit and #StopToxicTwitter

Since that meeting, Musk permitted @kanyewest to start posting again. From Ye’s “Death Con 3” tweet to @KyrieIrving promoting an antisemitic film, we’ve seen celebrities use Twitter to disseminate antisemitic conspiracy theories and hate to tens of millions of followers. pic.twitter.com/a173oYWFcv

Recall that earlier this week, the extent of the cozy relationship between the federal government and Big Tech companies was revealed in an in-depth piece by The Intercept outlining the mechanisms by which the tech companies censor content on the government’s behalf, a clear violation of the First Amendment.

Pretty soon, they’ll come for you.

“There’s a lot of facets to this,” Alex Jones said. “The social engineers are desperate, the power structure is desperate, and they are targeting individuals to try to set the precedent to ban, restrict, censor and surveil anybody they want.” 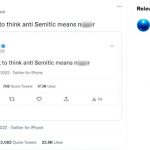