The post Trump-Endorsed Republicans Run The Polls In Arizona – Kari Lake Holds Steady Lead And Is Expected To WIN appeared first on The Gateway Pundit.

For voting information, ballot recommendations, and a “golden ticket,” visit onedayonevote.org and select your legislative district.

Kari Lake holds a steady lead in the race for Governor with tremendous grassroots support.

Get ready for GOVERNOR @KariLake pic.twitter.com/EsouwFhgbu

A final poll from Rich Baris shows Blake Masters holds a one-point lead over Mark Kelly, Kari Lake holds a four-point lead over Katie Hobbs, Abe Hamadeh is three points ahead of anti-law and order Kris Mayes, and Mark Finchem is tied with Adrian Fontes for Arizona Secretary of State.

Another poll for Mark Finchem’s race has him up 3 points on 2020 Election crook Adrian Fontes.

Interactive Polls shows Kari Lake with a 78% odds of winning her race. 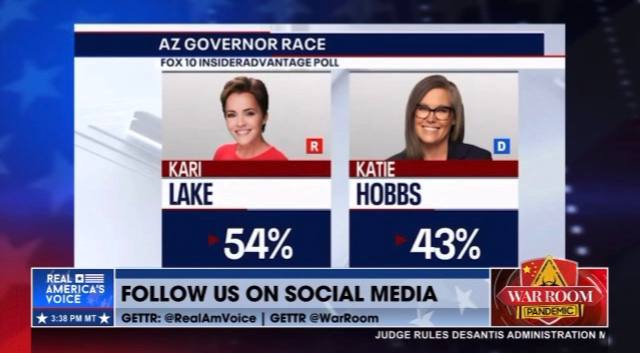 Blake Masters is in a tight race, but he has been gaining on Mark Kelly with endorsements from Marc Victor, the libertarian candidate who withdrew, and Chuck Norris.

As The Gateway Pundit reported earlier, early voting spells doom for the Democrats as Republican voters are expected to flood the polls tomorrow and outvote the Dems in person.

The current results suggest a good Tuesday for Republican candidates.

Everyone in Arizona must show up to the polls tomorrow with their friends and family to hold the line and elect Trump-Endorsed Republican candidates up and down the ballot.

For voting information, ballot recommendations, and a “golden ticket,” visit onedayonevote.org and select your legislative district.

If the election is free and fair, Arizona will elect the entire Trump-Endorsed slate of statewide candidates.

The post Trump-Endorsed Republicans Run The Polls In Arizona – Kari Lake Holds Steady Lead And Is Expected To WIN appeared first on The Gateway Pundit.