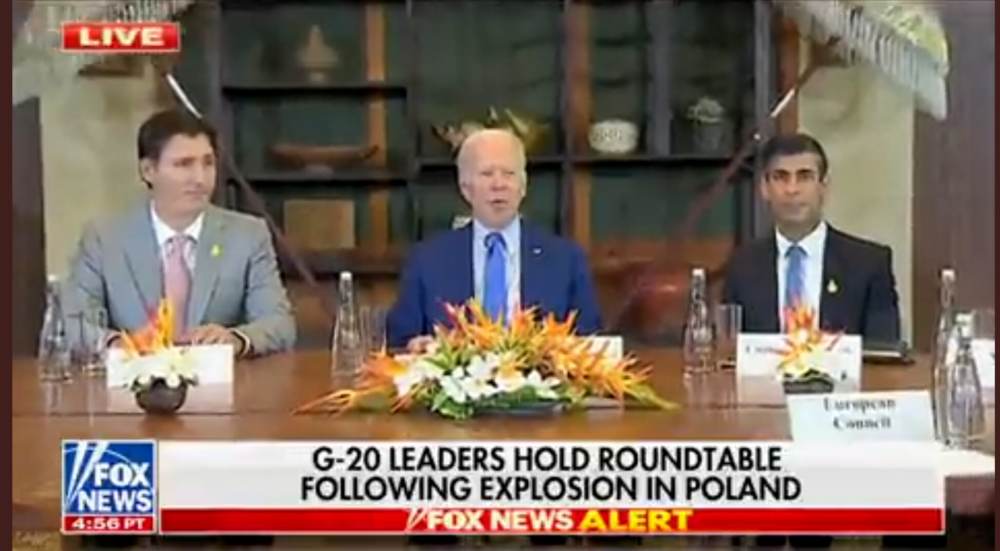 As the world edges closer to nuclear World War III over Russia’s invasion of Ukraine, Joe Biden tersely refused a reporter’s question about the reported Russian missile strike on Poland Tuesday that killed two Poles in a farm town on the border with Ukraine. 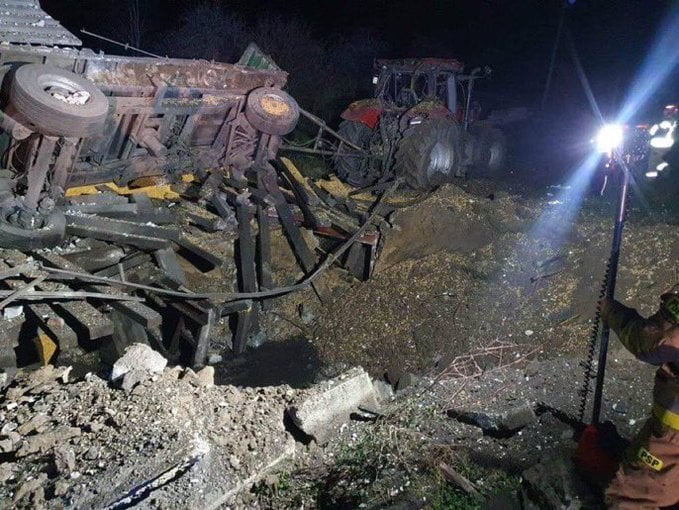 Biden had called for an emergency meeting of Western allied leaders Wednesday morning local time at the G20 Summit in Bali. In attendance were leaders from France, Germany, USA, Spain, Canada, UK, Italy, Japan, EU, Netherlands, and the European Commission.

Reporter: “Mr. President, can you tell us what you know so far about the explosion in Poland, sir?”

Reporter: “Mr. President, can you tell us what you know about the explosion in Poland?”

*press gets shooed out of the room by Biden’s handlers* pic.twitter.com/xSmGt4uLHz

The White House set a YouTube live feed of the meeting with this descriptor, “President Biden discusses a meeting with world leaders on explosion that took place in the eastern part of Poland and the United States’ commitment to support Poland’s investigation.”

It was also described as “President Biden holds an emergency round table with world leaders, Bali, Indonesia.” The live feed did not happen. The video now shows just a few seconds of the pool spray featured above but without audio.

President Biden will have an “emergency roundtable” with other world leaders in Bali shortly, according to the White House website.

Earlier Poland issued a statement confirming the deadly missile was Russian made.

Statement on summoning the ambassador of the Russian Federation to Polish MFA pic.twitter.com/bXc7qh676A

An emergency NATO meeting will be held on Wednesday where Poland will likely invoke Article 4–emergency consultation.

Article 4 is when a nato member is threatened, and calls for consultations.

Biden’s call with Poland’s Prez ended at 5:30 am local time in Indonesia. Reflects urgency of situation.

“President Joseph R. Biden, Jr. spoke with President Andrzej Duda of Poland and expressed deep condolences for the loss of life in Eastern Poland earlier this evening. President Duda described Poland’s ongoing assessment of the explosion that took place in the eastern part of the country near the border with Ukraine. President Biden offered full U.S. support for and assistance with Poland’s investigation. President Biden reaffirmed the United States’ ironclad commitment to NATO. The two leaders said that they and their teams should remain in close touch to determine appropriate next steps as the investigation proceeds.”

Russia has denied being behind the missile attack. 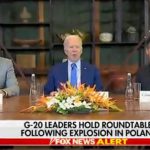 Go to Source
Author: Kristinn Taylor
Related Topics:
Up Next

BREAKING: Joe Biden Says “Preliminary” Information Suggests it is “Unlikely” that a Russian Missile was Responsible for Poland Attack

Get Woke, Go Broke: Disney To Lay Off Employees After Billions In Operating Losses