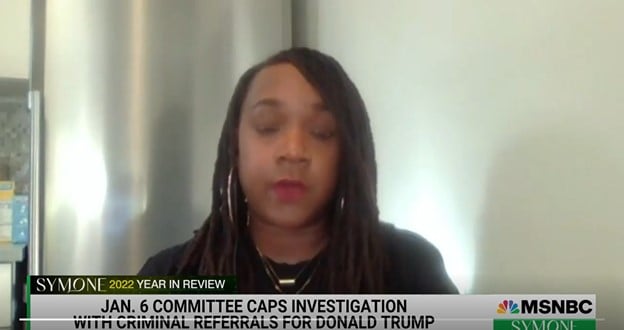 The most wonderful time of the year provides no relief for those suffering from Trump Derangement Syndrome and plain stupidity. In the case of Danielle Moodie-Mills, she says that failing to indict Trump actually means democracy dies in America. Moodie-Mills, who hosts an aptly named podcast called “WokeAF,” appeared Saturday as a guest on former…

The most wonderful time of the year provides no relief for those suffering from Trump Derangement Syndrome and plain stupidity. In the case of Danielle Moodie-Mills, she says that failing to indict Trump actually means democracy dies in America.

Moodie-Mills, who hosts an aptly named podcast called “WokeAF,” appeared Saturday as a guest on former Kamala Harris spokesperson Symone Sanders’s MSNBC show Symone. Sanders asked Moodie-Mills for her thoughts on the “efficacy” of the January 6th witch hunt and “what it means for the broader efforts to hold the former president accountable.”

Here are the relevant parts of Moodie-Mill’s response via Breitbart (edited in part for clarity and fact-checked):

“I think what we saw from the bipartisan January 6 House Committee is, in fact, a thorough investigation. Using Trump’s own people, in their own words, to lay out exactly the fact that this was not just an act of happenstance, of people getting caught up in the moment. This was a plan, a strategic attack on our Capitol building and our democracy directed by the president of the United States.”

The only thing “thorough” about the Committee was their determination to convince the Department of Injustice to arrest Trump. Their desperation proved so pronounced they relied on a fired and disgraced former Trump aide named Cassidy Hutchinson.

This so-called witness perjured herself on multiple occasions before the committee. But she got away with her lies because warmongering, Trump hater Liz Cheney conspired with her every step of the way.

Moodie-Mills also neglects to mention the numerous law enforcement failures that left the Capitol unguarded on that fateful day. The follies proved so glaring that officers actually allowed protesters to enter the Capitol via the side door.

This was all Nancy Pelosi’s fault because she and the rest of the Democratic leadership were closely involved in security decisions leading up to and on January 6th. Yet she simply sat on her hands.

Moodie-Mills then continued her nonsensical remarks:

“We knew that Donald Trump knew that those crowds of people had weapons. What did he say? They are not here to harm me.”

“So, I think that right now, the ball is in Merrick Garland and Jack Smith’s hands to decide whether or not this is something America is going to shrug off and turn us into a banana republic, or something that they are going to take action on and ensure that democracy will still hold.”

What would turn America into a banana republic is if Trump were arrested and indicted based on a tantrum from the radical left and Never Trumpers. We already got a taste of this with the FBI raid on Mar-a-Lago. Trump was targeted solely based on politics while doing the same thing as Clinton, Bush, and Obama after leaving office.

Arresting Trump would mark the first time in American history that a sitting president’s administration had ordered the detainment of a former president. Yet these things happen all the time in third-world countries. America would enter uncharted waters where anything is possible, including civil war.

If Trump loses his political freedom, even temporarily, the radical left’s crusade will not end. You are next on their list. 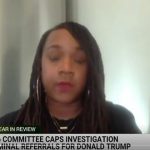