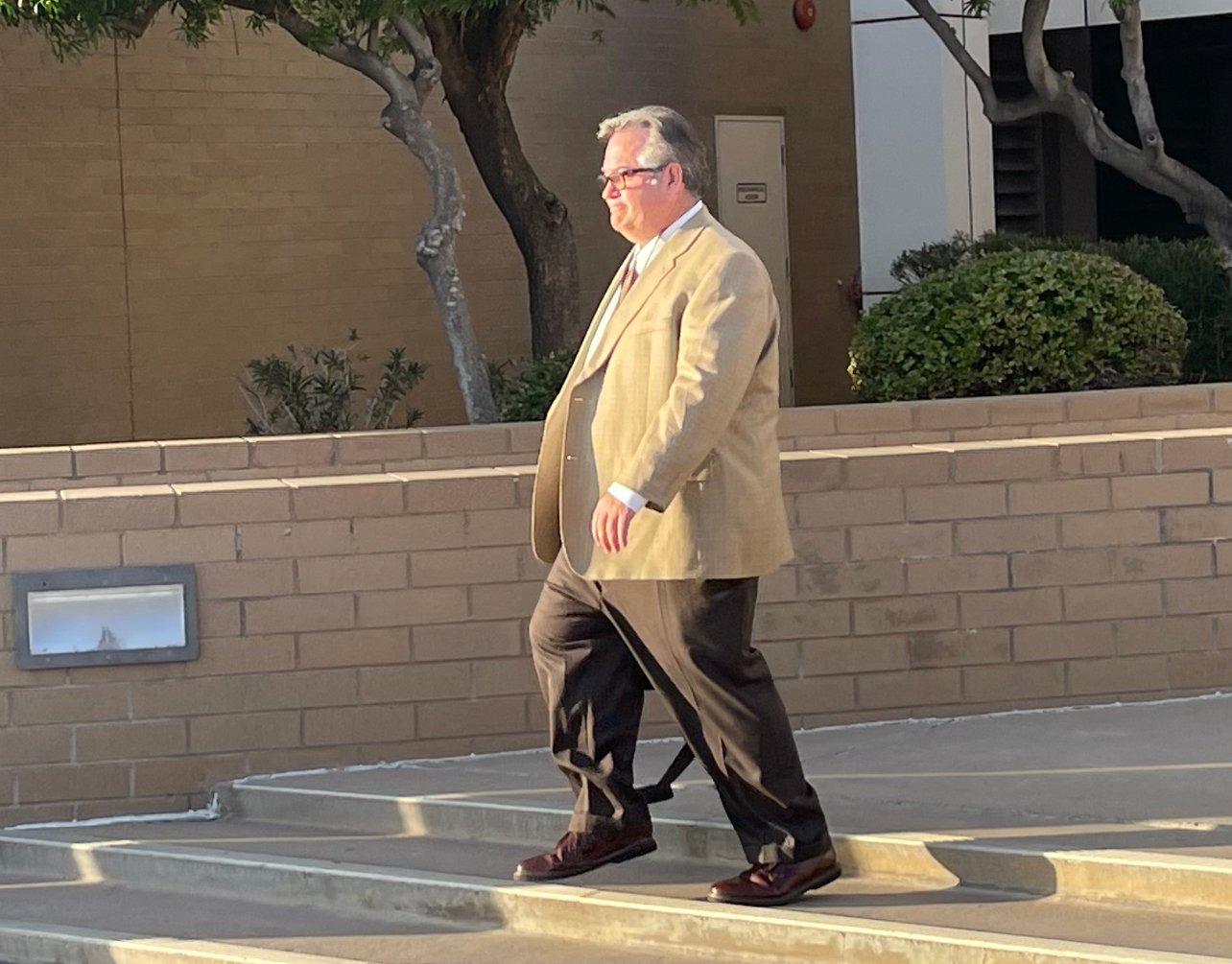 Maricopa County Attorney Tom Liddy appears to have lied in court on Wednesday and Thursday when attempting to object to evidence that Kari Lake’s attorneys presented in Lake’s historic 2022 Midterm Election lawsuit. According to the Legal Information Institute, an officer of the court is “any person who has an obligation to promote justice and uphold…

Maricopa County Attorney Tom Liddy appears to have lied in court on Wednesday and Thursday when attempting to object to evidence that Kari Lake’s attorneys presented in Lake’s historic 2022 Midterm Election lawsuit.

According to the Legal Information Institute, an officer of the court is “any person who has an obligation to promote justice and uphold the law, including judges, clerks, court personnel, police officers, and attorneys (who must be truthful in court and obey court rules).”

The Gateway Pundit reported that the rather unimpressive attorney also went on a wild and bizarre rant in his closing remarks in the 2020 Election case with Kari Lake.

Maricopa County Attorney Goes on Bizarre Rant, Says to Thousands of Disenfranchised Voters from Election Day “You Reap What You Sow”

This is the same lackluster attorney who previously said the issue of voter suppression was improperly brought before the court by Kari Lake and her attorneys, claiming that “voter suppression” is a term reserved for black voters who were murdered by Democrats.

“Voter suppression looks like the nearly 3500 African American men who were murdered, beaten in front of their families, and hanged from trees between 1865 and 1933,” said Liddy.

On Wednesday, before election investigator Heather Honey was called to the stand there was a dispute over evidence that was submitted by Lake’s Attorney, Brian Blehm.

The evidence in question was a voicemail from Maricopa County Voter Outreach Manager Betty Galanter, which the plaintiffs used to prove that Maricopa County has not complied with public records requests for ballot chain of custody documentation.

As The Gateway Pundit reported, hundreds of thousands of ballots were transported to and from Runbeck Elections Services with no chain of custody documentation. Because of this, it is very possible that these ballots were fraudulently inserted into the system.

Heather Honey gave an incredible testimony on the chain of custody failures that rendered the OVER 300,000 ballots invalid.

Tom Liddy objected to this voicemail being used in the court, stating that it was “hearsay testimony” and that it had “no authentication.” He later avowed that nobody by the name of Betty works in the Maricopa County Department of Elections.

Betty’s voicemail was then played in court, and she is heard stating that she is “calling with the Maricopa County Elections Department,” and they “still don’t have the information” that was requested.

This issue was raised again in court on Thursday, and Blehm showed the court Betty Galanter’s Maricopa County business card, reminding the Judge, “they avowed that nobody by the name of Betty works in the Department of Elections.”

This is false. Nobody alleged that Betty worked in the public records department, and that is not what Liddy told the Judge on Wednesday.

Blehm told the court on Wednesday, “it’s a voicemail from somebody by the name of Betty who identifies herself as working at the Department of Elections for Maricopa County.” Blehm then said, “they know who Betty is,” and Tom Liddy chuckled at him.

“Somebody knows who Betty is because she works in the elections department,” said Blehm right before Liddy avowed that “there’s no one and the Department of Elections or Public Records Department named Betty.”

Similarly, as The Gateway Pundit reported, Election Director Scott Jarrett was also busted changing his story and perjuring himself by lying about the ballot printer settings that caused tabulation failures and disenfranchised thousands of election day voters.

Liddy: I’m gonna object calling this witness for the purposes of testifying by hearsay testimony by somebody named Betty who is not a party in this case and therefore cannot make any statements, admissions on behalf of the party. And this so-called voicemail has no authentication. So I would object on foundation as well, Your Honor.

Blehm: I would guarantee you as they stand here today, they know who Betty is. Somebody knows who Betty is because she works in the elections department.

Judge Thompson: Have you heard the voicemail before?

Blehm: That would make an interesting prank phone call, Your Honor, that somebody identifies themselves from the Maricopa County Elections department, stating their name and saying we’re still waiting for records responsive to your request, Your Honor. My client will testify as to who this individual is. I’m sorry, not my client, my witness, will testify your honor that she interacts with this individual. Okay, and she’s fulfilling FOIA requests from the Maricopa County Recorders Office.

Blehm: Certain vows were made to this court by defense counsel yesterday. They avowed that nobody by the name of Betty works in the Department of Elections.

Blehm: What I’ve placed on the ELMO, Your Honor, is a copy of a business card for Betty Galanter. Betty Galanter is not just some low level employee. She is the Voter Outreach Manager. 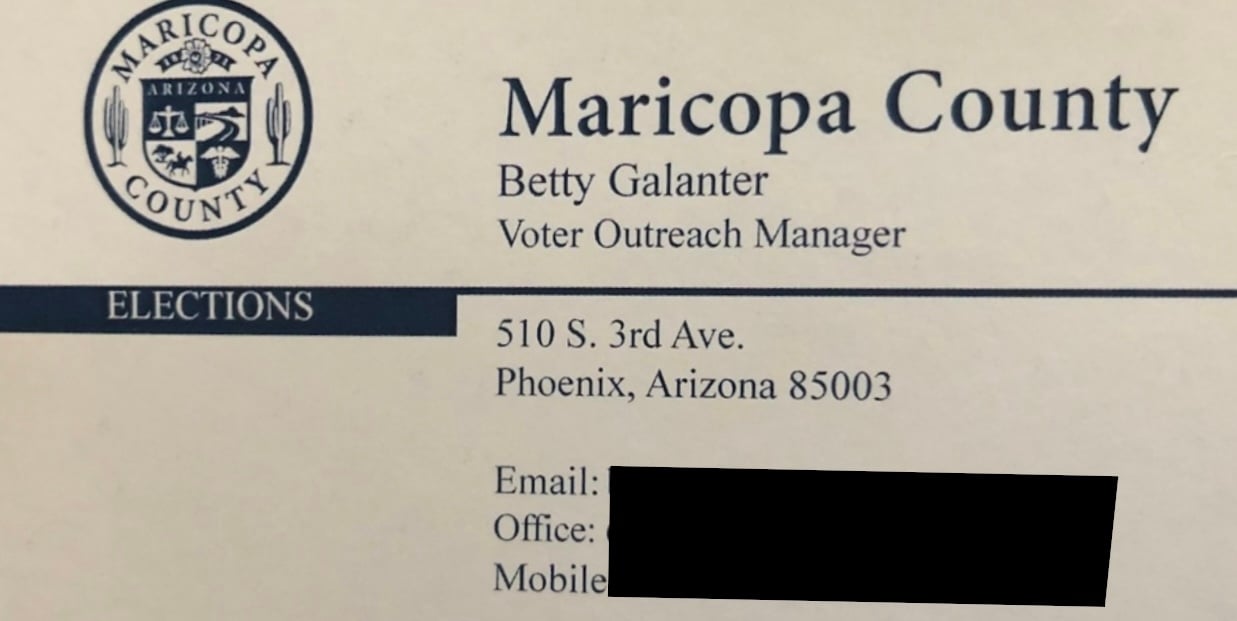 More records of Betty Galanter holding this position with Maricopa County can be found here, here, and here. 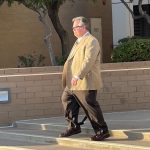 Netflix Customers Could Face Criminal Charges For Sharing Their Password