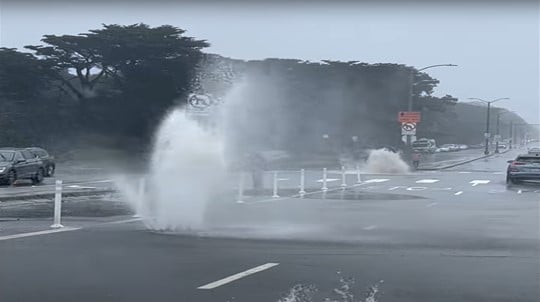 In over 99% of cases, flooding inevitably leads to panic over property damage, potential spread of disease, and even death. But for the nation’s filthiest and most amoral city, it counts as a long-overdue and essential bath. The People’s Republic of San Francisco was pounded with over five inches of rain on New Year’s Eve,…

In over 99% of cases, flooding inevitably leads to panic over property damage, potential spread of disease, and even death. But for the nation’s filthiest and most amoral city, it counts as a long-overdue and essential bath.

The People’s Republic of San Francisco was pounded with over five inches of rain on New Year’s Eve, causing severe flooding across the city. Cars across the city were submerged under the toxic floodwater washing away feces, needles, and homeless tents from the streets and sidewalks.

The flooding proved so overwhelming that it caused sewer geysers to burst in the middle of the roads. A local resident tweeted a video showing multiple ones exploding in one small area.

Mudslides also resulted from the historic rainfall. These flowed all the way down from the hills and into renowned areas such as Folsom Street and Precita Park.

Never seen anything like this in San Francisco. Bernal right now… pic.twitter.com/l0J1ZCslY4

Folsom is an arroyo. pic.twitter.com/1QOByxj5WV

The floods caused water levels to rise to the point that some people had (or wanted to?) to surf the streets. Hopefully, none of them accidently swallowed a drop.

While some may find themselves worried at first about the city’s welfare, this is actually the cleanest San Francisco has looked in decades. Remember, visitors currently need an actual map to know where to avoid human waste across the city.

Productive residents may also find temporary respite from mentally ill homeless individuals harassing and assaulting them. Also much tougher to commit crimes like carjackings in flooding conditions as well.

Some may argue God is sending a message as well by flushing the city toilet with this freakish flooding event. Perhaps He is also angered by the city’s residents turning away from Him and toward revolting decadence?

Here’s a particularly apt message that conservatives across America will welcome. Our nation would find themselves far better off as a result if we applied this coast to coast.

The New Year in San Francisco was rung in by a biblical flood heretofore unseen.

Let’s flush our local politicians, non-profits and corrupt media down the gutters and wash this city of their noxious stench and sins.

Welcome to the great cleansing!

Even more welcome news beckons with rain in the forecast almost every day over the next two weeks. May the great purification continue. 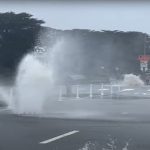