The post McCabe Says the DOJ Should Refuse to Cooperate with House GOP’s Biden Documents Investigation (VIDEO) appeared first on The Gateway Pundit.

It was revealed this week that Joe Biden improperly stored stolen classified documents at his private office and in his garage next to his Corvette.

McCabe said it’s time for the DOJ to play hardball and obstruct Republicans in Congress.

“Chairman Jim Jordan announced this House Judiciary Committee investigation into the DOJ actions related to the President’s handling of the classified documents today,” CNN’s Anderson Cooper said on Friday. “How much does that impact the DOJ ongoing investigation?”

McCabe said the DOJ should refuse to cooperate with the House GOP’s investigation and hide documents under the guise of an ‘ongoing investigation.’

“I certainly would advise them — if they were willing to listen to my advice — I would advise them to take a very hard line against that,” McCabe said. “There is a clear precedent here of not sharing information from an ongoing criminal investigation with Congress. And I think the DOJ is in a very strong position to resist on those grounds.”

“Who knows what comes of that resistance?” McCabe continued. “Maybe DOJ leadership starts getting subpoenaed.

Never forget, McCabe admitted he opened a counterintelligence investigation into President Trump in May 2017 shortly after Trump fired Comey as FBI Director.

McCabe was investigating whether Trump was ‘acting as an agent of Russia.’

McCabe also opened a criminal investigation into Trump for possible obstruction of justice for firing Comey.

McCabe was ultimately fired after a DOJ watchdog determined he lied to federal investigators.

Andrew McCabe should be sitting in prison cell.

The post McCabe Says the DOJ Should Refuse to Cooperate with House GOP’s Biden Documents Investigation (VIDEO) appeared first on The Gateway Pundit. 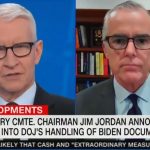 Prediction Consensus: What The Experts See Coming In 2023