The killer murdered the victims around 4:17 am (between 4:00 and 4:25) based on testimony from one of the surviving roommates.

According to the court documents, Kohberger’s DNA was found on a tan leather knife sheath left behind on Maddie Mogen’s bed on the 3rd floor at the King Road Residence.

“The sheath was later processed and had ‘Ka-Bar’ ‘USMC’ and the United States Marine Corps eagle globe and anchor insignia stamped on the outside of it,” Idaho police officer Brett Payne wrote in the 19-page affidavit. “The Idaho state lab later located a single source of male DNA (suspect Profile) left on the button snap of the knife sheath.”

Police also executed a search warrant at Kohberger’s Pullman, WA apartment which was located approximately 10 miles from the crime scene. The search warrant was unsealed on Wednesday.

No weapons were recovered.

“The King Road Residence contained a significant amount of blood from the victims including spatter and castoff (blood stain pattern resulting from blood drops released from an object due to its motion) which, based on my training, makes it likely that this evidence was transferred to Kohberger’s person, clothing, or shoes,” the document states, according to Law & Crime. “Based on the locations of the suspect vehicle and [Kohberger’s] phone immediately following the murders, it is probable that Kohberger went home to his residence at 1630 NE Valley Rd. At that time, it is likely that he still had blood or other trace evidence on his person/clothes/shoes, including skin cells or hai from the victims or from Goncalves’ dog. It is likely that some trace evidence was transferred to areas in his apartment through contact with the items worm during the attack. ” 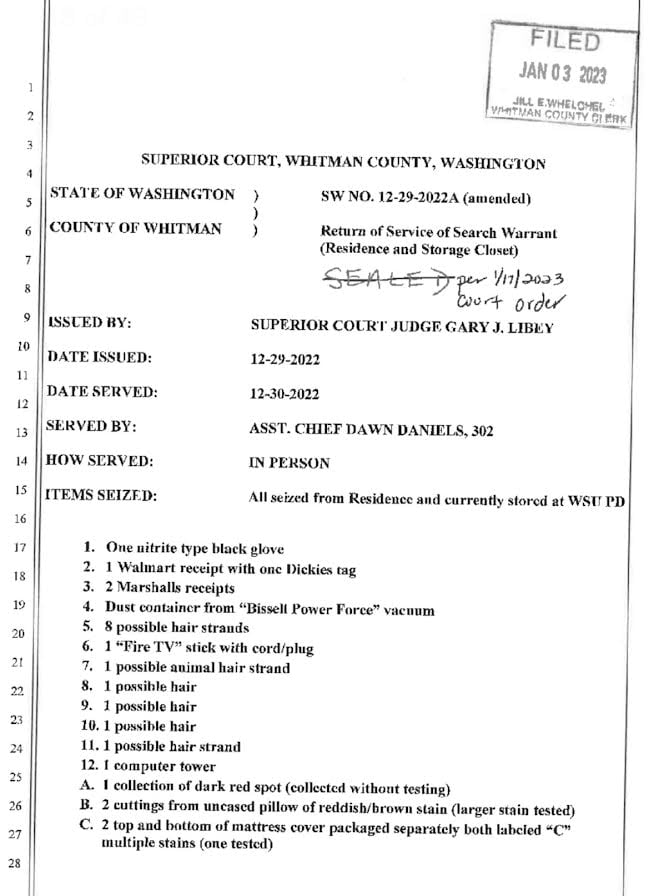 According to an investigator, Kohberger repeatedly messaged one of the victims on Instagram – and his messages went unanswered.

“He slid into one of the girls’ DMs several times, but she didn’t respond,” an investigator told People. “Basically, it was just him saying, ‘Hey, how are you?’ But he did it again and again.”

“Authorities remain tight-lipped about the alleged motive in the attack. They have not publicly discussed the relationship between Kohberger and the victims. Kohberger’s now-deleted Instagram account — which was viewed by PEOPLE before it was removed — followed the accounts of Mogen, Goncalves and Kernodle, but there was no public interaction.” PEOPLE reported.

The preliminary hearing was scheduled for June 26 at 9 am.